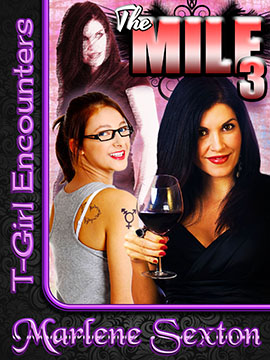 Ricky had an affair with Sharon, his best friend’s mom who happened to also be a beautiful transwoman, and had spent a wild night with Sharon and her new lover Elaine. Now Ricky finds himself back home to attend the wedding of Sharon and Elaine and there’s the promise of even more fun with the beautiful t-girls. That is until Ricky meets Cyn, a pretty young girl Sharon is helping to transition. For Ricky it’s love at first sight, but can he win the heart of the young transsexual or will he have to leave her behind.

I've had a great time doing this and I appreciate all the support.  I've sold thousands and thousands of books over the last 18 months.  Thank you.  My books will remain on sale for the foreseeable future for others to find.  Thank you again.

Thanks for reading!!!
Posted by Unknown at 10:00 AM No comments:

The T-Girl Next Door 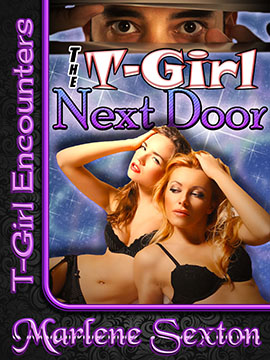 It's been a while.  Time flies when you're having fun, I suppose.  Never fear, I'm happy to announce my latest release, The T-Girl Next Door.  It's the tenth T-Girl Encounters story and it was a lot of fun to write.  I can't believe I've got ten t-girl stories.  T-girls are obviously my favorite subject.  I think a lot of you like them too.

Lesbians fascinated Ed. So when a sexy woman moved in next door and began entertaining other hot women, his fantasies went into overdrive. However, Ed’s wife, Anne, wasn’t so sure though she refused to tell Ed how she might know. Ed couldn’t resist taking a peak in his neighbor’s window to find out if she was really a lesbian but inside his neighbor’s bedroom, Ed found two unexpected surprises. His sexy neighbor had a huge cock but more alarming was the woman she making love to. It was Ed’s wife, Anne!

Thanks for reading!
Posted by Unknown at 8:58 PM No comments:

I've got several reviews on Amazon for books in my T-Girl Encounters collection that have one thing in common.  They question the idea that a transwoman could somehow be attractive or feminine enough to pass as a woman.  They say things like this:

"Come on, I never have seen any trannies that have been that good that they can carry on the story for years."

"The author would have you believe that Jerry has no clue that Denise is a transgender woman until she tells him."

Or this one i got just today:

"[The cock] belongs to a drop-dead gorgeous blonde so it's definitely fantasy."

There are all types of women, some are naturally beautiful and some aren't.  Some age gracefully and others aren't so lucky.  I'm not going go on some rant about how our society shouldn't regard physical beauty as important or judge people based on looks.  That's human nature.  But does being less attractive make a woman less of a woman?

Not to mention that many of us have unrealistic expectations when it comes to beauty.  Playboy Bunnies and runway models are not the norm.  Most of us aren't so blessed but that doesn't diminish us as people or as women.  Those quotes above though seem to suggest that not being outrageously attractive means a transsexual can't be regarded as a woman or that some men (and women) can't find a less than perfect woman attractive.

I'm not sure what ideas these readers have about transsexuals, crossdressers, drag queens and fembois (or women in general for that matter), but they seem to be pretty narrow and fairly negative.  And honestly, who cares if a woman, trans or otherwise, can "carry on the story?"  Gender is a state of mind, not a function of what does or doesn't get tucked into your panties.

And honestly, I write fiction.  Just like straight romance and erotica is full of hot, sexy women and God-like heroes, so is transgender erotica.  We all want to read about beautiful people having incredible sex.  Most of us get enough of average looks and mundane sex in our personal lives.  That's reality and there's nothing wrong with it, but fantasy should be, well, fantasy.

So, yes, my heroines are all passable and pretty.  Whether they are transsexuals, crossdressers or whatever, they are beautiful, sexy and attractive.  They have big, functional cocks or pretty soft penises, both are sexy, they are conventionally beautiful and in many cases, the men and women that they meet have no idea they are anything but the women they see themselves as.  Besides, most readers generate their own mental image of a character and who's to say they aren't envisioning the character as being quite average because they personally find that desirable.

Those three statements above are a little offensive and way off base.  It's fiction, so it's OK to suspend your disbelief.  But there are many transwoman that are completely passable and to suggest that isn't even possible is just plain ignorant.  Honestly, I admire a person that is willing to go to the lengths transgendered people do to look and feel like the gender they are inside.  But being passable or not isn't what determines if your a woman just as having a vagina doesn't.  Gender isn't about how you look or what's between your legs, it's about how you feel and maybe that's all it takes for another person to see you as such.

I hope my stories not only turn people on but that they also present a positive view of transgendered people.  They might seem strange to you but I bet you seem strange to someone somewhere on this planet.  Whether transwomen, crossdressers, drag queens or sissies and whatever the motivation to feel feminine (or masculine as the case may be), they are all human beings just trying to make it through life as best they can.  They aren't ill, they aren't evil and they aren't crazy.  They just are and some of us happen to find them attractive.

By the way, all the women in the pictures are transgendered.  Kim Petras is a German pop star.  Kylan Wenzel is the first transwoman to compete for the Miss USA crown.  Jenna Talackova was a finalist in the Miss Universe Canada pageant.  Candis Cayne is an American actress.  Most interesting of all, Jan Hamilton is a former British Army officer,  paratrooper and reportedly quite macho and rugged as a male.
Posted by Unknown at 3:58 PM 4 comments: 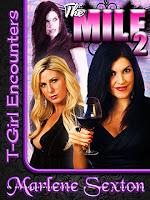 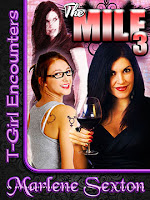 I am in love with these characters and I had a blast writing these stories.  I admit, the story took a romantic turn but the sex is still fantastic and, better yet, frequent.  You won't believe the twists the story takes or the incredible fun Ricky has with the three t-girls in his life.  I invite you to come along for the sexy ride that's coming to your favorite retailer very soon.
Posted by Unknown at 9:05 AM 3 comments:

Erotica For All - Carl's Adult Books

If you read erotica, you've probably run across the name Carl East.  You've probably read some of his work.  Carl is a prolific and very successful erotica author.  Now Carl has a website, Carl's Adult Books.  It's not a retail site like Amazon or Smashwords but a place where erotica authors can list their books.

So what, you might ask.  Well, Amazon is huge and finding books there is tough, especially if your tastes aren't sanctioned by the retailer and filtered.  The other retailer's search engines leave much to be desired.  Honestly, most books are found by accident or by those with the patience to learn to navigate the search engine.

Carl's is nothing but books and all of those are erotica by some of the biggest names in the business.  Besides Carl's books, you'll find Virginia Wade, Cheri Verset and Saffron Sands along with many others, including yours truly, and the list is growing every day.  From Bigfoot to daddy/daughter to billionaire's to t-girls, you'll find what you want and more.  I highly recommend you check it out!

http://www.carlsadultbooks.com
Posted by Unknown at 6:48 PM No comments: 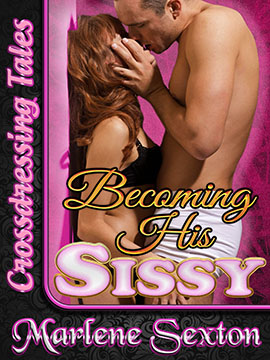 With my latest release, Becoming His Sissy, I've taken a bit of a different direction.  I'm not sure if it was my intent but I've managed to mix the classic crossdressing sissy tale with the popular alpha male romance.  I don't know what you call it, maybe bromance, but it's hot as hell.  Two guys, one a dominant gay man and the other a crossdressing sissy, put on one heck of a show!


Danny’s friend, Josh, is out of the closet. He’s gay and tired of living a lie. If only Danny had the guts to come out of the closet himself. Danny isn’t exactly gay though. He’s a crossdresser that harbors a secret desire to be dominated by a man. If only Danny could find the courage to tell his friend. However, Josh already knows Danny’s secret and Josh is planning to turn Danny into Danielle and make him his own personal sissy slave.

Becoming his Sissy is a sexy, alpha male story for the rest of us.  You don’t have to be a woman to enjoy the idea of being dominated by a strong, sexy man.  You just have to enjoy wearing pretty dresses, sexy lingerie and high heels.  C’mon boys, indulge your inner sissy and submit to the man of your dreams!  You can get Becoming His Sissy at all the usual places, listed to the right.  It's fun, it's different and it's about as gay as you can get and that's a very good thing!

Thanks for reading!
Posted by Unknown at 9:12 PM No comments: 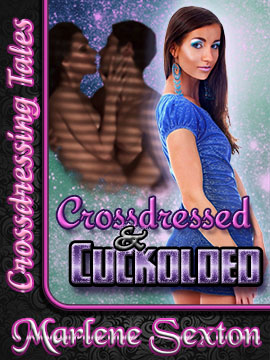 I've released my latest book, another in my Crossdressing Tales series, called Crossdressed & Cuckolded.  This one is a little different.  It tells the story of a man that enjoys being a sissy and his wife that is learning to love her roll as his dominate cuckoldress.  Except this time, it's from both points of view.

Crossdressed & Cuckolded is available from all of the retailers listed to the right.  It is full of hot sex, humiliation and has a little twist at the end.  If only all sissies were this obedient.  Pick up a copy today or any of my transgendered erotica.  You won't be sorry.

Thanks for reading.
Posted by Unknown at 11:01 AM 1 comment:

Facebook is so 2010 and Twitter is dumb. But Tumblr is awesome! Pictures, stories and animated GIF yumminess. Come follow me and see what turns me on!